The recommended way to install MySQL on a Linux system is via RPM. MySQL AB makes the following RPMs available for download on its website −

The MySQL RPMs listed here are all built on a SuSE Linux system, but they will usually work on other Linux variants with no difficulty.

Now, you will need to adhere to the steps given below, to proceed with the installation −

You can find all the MySQL related binaries in /usr/bin and /usr/sbin. All the tables and databases will be created in the /var/lib/mysql directory.

The default installation on any version of Windows is now much easier than it used to be, as MySQL now comes neatly packaged with an installer. Simply download the installer package, unzip it anywhere and run the setup.exe file.

The default installer setup.exe will walk you through the trivial process and by default will install everything under C:\mysql.

Test the server by firing it up from the command prompt the first time. Go to the location of the mysqld server which is probably C:\mysql\bin, and type −

NOTE − If you are on NT, then you will have to use mysqld-nt.exe instead of mysqld.exe

If all went well, you will see some messages about startup and InnoDB. If not, you may have a permissions issue. Make sure that the directory that holds your data is accessible to whatever user (probably MySQL) the database processes run under.

MySQL will not add itself to the start menu, and there is no particularly nice GUI way to stop the server either. Therefore, if you tend to start the server by double clicking the mysqld executable, you should remember to halt the process by hand by using mysqladmin, Task List, Task Manager, or other Windows-specific means.

After MySQL, has been successfully installed, the base tables have been initialized and the server has been started: you can verify that everything is working as it should be via some simple tests.

Use the mysqladmin Utility to Obtain Server Status

Use mysqladmin binary to check the server version. This binary would be available in /usr/bin on linux and in C:\mysql\bin on windows.

It will produce the following result on Linux. It may vary depending on your installation −

If you do not get such a message, then there may be some problem in your installation and you would need some help to fix it.

You can connect to your MySQL server through the MySQL client and by using the mysql command. At this moment, you do not need to give any password as by default it will be set as blank.

You can just use following command −

It should be rewarded with a mysql> prompt. Now, you are connected to the MySQL server and you can execute all the SQL commands at the mysql> prompt as follows −

MySQL ships with a blank password for the root MySQL user. As soon as you have successfully installed the database and the client, you need to set a root password as given in the following code block −

Now to make a connection to your MySQL server, you would have to use the following command −

UNIX users will also want to put your MySQL directory in your PATH, so you won't have to keep typing out the full path everytime you want to use the command-line client.

If you want to run the MySQL server at boot time, then make sure you have the following entry in the /etc/rc.local file.

Also,you should have the mysqld binary in the /etc/init.d/ directory. 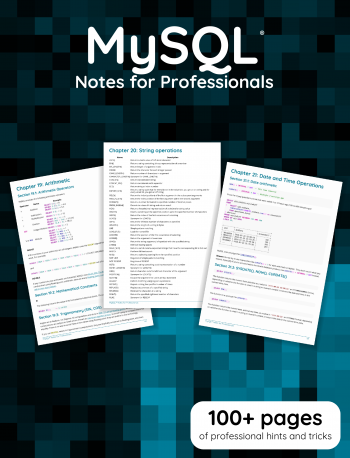